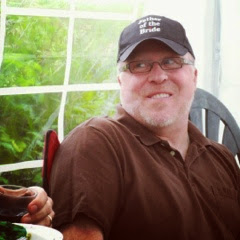 Today is my Dad's birthday.  He would be 58 years old!  I always called him Oh Ancient One :-)

My Dad died Friday, October 21st, 2011 at 9:45pm.  We were all at home and my brother, mom and I were all holding his hands and laying on his chest.  I don't ever want to forget it.  The peace of God was so tangible in that room....I wish I felt it that strong every day since.

This week I heard a verse from the Bible that has really been in my heart since October 21, 2011.  "Eternity is hidden in the hearts of men."  Since my Dad has died, I haven't stopped thinking about eternity.  Heaven was made way more personal to me since his death.  I've never wanted to be in heaven so much as I have since my Dad moved there.

His death has been the hardest thing I've ever walked through in my life.  I think it's safe to say most people don't understand how I'm feeling most of the time, so it's been quite lonely.  But I don't want to write about his death in this post, I'd like to write about his life!

Dad was born in Washington State, USA, this day 58 years ago!  He was raised in a home with 3 brothers...one of which killed himself when Dad was 18.  He was the one that found his brother.  When Dad was 21, he was on his way to kill himself when he drove past the church of the youth pastor that preformed his brother's funeral.  He remembers thinking, "Why not go in?"  His life was forever changed.  He found the Youth Pastor and was led to the Cross.  Drug and alcohol addiction was broken instantly as the Creator of the Universe found my Dad.

My Dad become pretty unrecognizable after God found him.  Full of hope and healing.  Full of purpose and destiny.  Eternity was hidden in his heart, and for the next 35+ years, he chased after Jesus with all his heart.

That's the man that I knew.  He always talked about Jesus as this person...this man that was apart of our family.  God was never this "thing" in the sky that was too far away for us to ever know.  God was always apart of our daily living.  Dad always tried his best to be the best example of Christ in our home.  I know he was always nervous that he wasn't the best Dad or husband, but I think what made him those things is his willingness to learn and grow when he wasn't his best.

I remember times when my Dad would tell stories about being a new Dad.  He was always afraid that he would be abusive like his father was.  He would say, "Sometimes I would have to walk out of the room and just leave you and your brother there to be sure I didn't hurt you."  That might be shocking to some, but to me I thought, "Are you kidding me?  You know how much BRAVERY that took?!  I am SO stinking proud of my Dad!!!!"  Dad never once hurt us...and I know it was because he chased after Jesus everyday to the best of his ability.  Not just for the sake or "doing" Christianity, but because he wanted to BE like Jesus.  That's the man I knew.

I say all this because I know this was a struggle for him even until the day he died.  A few days before he died, I remember him asking me, "Hannah, was I good father to you and John-Michael?"  I just wept with him and kept saying, "You were the best Dad I could have ever asked for."  He was so humble...and the only thing he ever wanted was to be like Jesus.  Yes, he made mistakes and wasn't perfect.  But you know, now that he's gone, all I can think of are the incredible things he's done!  And what an incredible man he was.

So that's what I wanted to share with you.  Not many people ask me these days what kind of man my Father was.  But without any hesitancy, I will always be able to say, "He was like Jesus."

I want to share something with you, and with any Dad or Mom reading this.  Here is a picture of the front page of a Bible my Dad gave to me when I was 11.  It was his preaching Bible and I treated it like treasure!  It has since been through a moldy basement and with tears I had to throw it away, but I saved the front page. 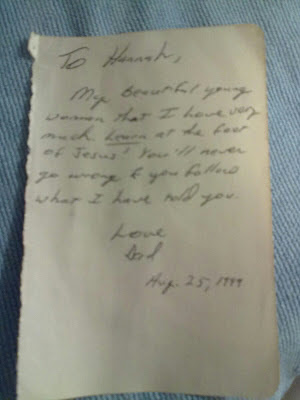 To Hannah,
My beautiful young woman that I love very much.  Learn at the feet of Jesus.  You'll never go wrong if you follow what I have told you.
Love,
Dad
Aug. 25, 1999


Dad always treated me as more than I ever was in the moment...and I know that is partly why I have grown into a beautiful young woman.  I always listened to my Dad...even when I didn't want to! :-)  And I still listen to my Dad now that he is no longer here on earth.  His words are still true.  How many can say, "Follow me as I follow Christ!" like what Paul told the 1st Century Church?  Because of my Dad's example, I want to be able to say this to my kids some day.

Lastly, I want to share a few pictures of me and my Dad with you.  These are some of my favourites.  I don't have alot from when I was a kid, but just imagine me shorter and Dad with more hair, lol!

Thank you for reading this.  I hope my Dad's life can keep rubbing off on people...even those that never knew him. 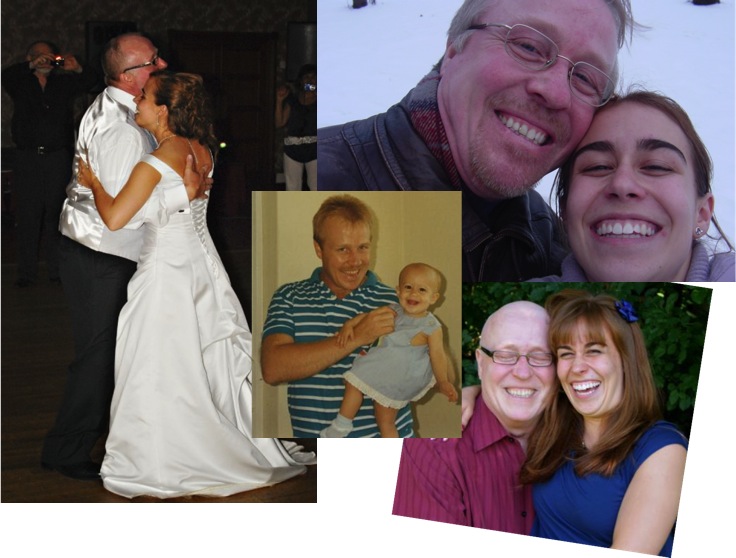 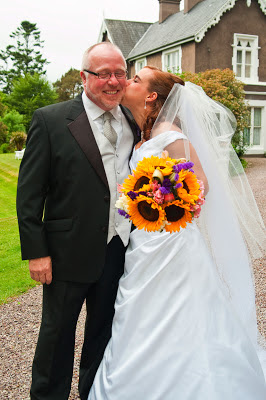 This is the picture of him whispering who I am, as we walked down the isle....he got to be quite the softy in his "old" age :-)

Email ThisBlogThis!Share to TwitterShare to FacebookShare to Pinterest
Labels: hope